The Bouctouche JCs are a Senior level hockey team based in Bouctouche, New Brunswick.  The team was established in 2011.  The team is a member of the North East Senior Hockey League.  The team is based out of the JK Irving Centre.

The team was registered at the Senior A level from 2011 until 2016.  The team elevated its program to Senior AAA for the 2016-17 season.  The move was brought about when the Kenora Thistles (senior) who were an independent team playing under the sanctioning of Hockey Northwestern Ontario  folded in January of 2016 after having been awarded the hosting duties for the 2017 Allan Cup.  The tournament was then re-awarded to the JCs to be held at the JK Irving Centre.  The 2017 Allan Cup was held April 10-15.

The Bouctouche Dodge Ram JC's have revived Senior hockey in south eastern NB Canada with the formation of the Beausejour Senior Hockey League (BSHL) for the 2019 - 2020 season with the Elsipogtos Hawks and Cap Pelé Pècheurs. 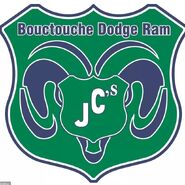 BSHL
Add a photo to this gallery

Retrieved from "https://icehockey.fandom.com/wiki/Bouctouche_JCs?oldid=700661"
Community content is available under CC-BY-SA unless otherwise noted.