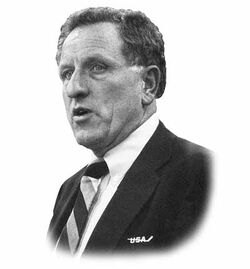 Robert N. Johnson, better known as "Badger" Bob Johnson (b. March 4, 1931, Minneapolis, MN; d. November 26, 1991, Colorado Springs, CO) was a player, coach, and promoter of college hockey and American hockey in general. Johnson earned his nickname as "Badger" Bob from his 15 years and three NCAA titles as the head coach at the University of Wisconsin, but also coached at Colorado College, coached U.S. National and Olympic teams, coached the NHL's Calgary Flames to the Stanley Cup finals, and won the Stanley Cup as the coach of the Pittsburgh Penguins. His accomplishments speak for themselves, but Johnson is best known for his tireless enthusiasm and postivity, even in the bleakest of moments. His signature phrase is his most powerful legacy: "It's a great day for hockey!"

Johnson was born and raised in Minneapolis, Minnesota. He played high school hockey for the now defunct Minneapolis Central High School, and later went on to play at the University of Minnesota, under the tutelage of legendary coach John Mariucci.

Following his time with the Gophers, Johnson served as a medic during the Korean War. After returning home to Minnesota, Johnson got back into hockey, but this time as a coach. Starting off in the high school ranks, Johnson coached first in Warroad, MN, and later back in his hometown of Minneapolis, coaching Roosevelt High School to four Minneapolis City titles in six seasons.

Johnson's success at the high school level did not go unnoticed in the larger hockey community. In 1963, Johnson was hired as the head coach at Colorado College. Johnson only spent three years in Colorado Springs, never leading the Tigers to a winning season. Still, Johnson mananged to turn some heads, considering that the Tigers were only two seasons removed from a winless campaign (0-23-0 in 1961-62).

After his three seasons in the Rockies, Johnson was hired as only the second coach in the modern era of Badger hockey. Johnson replaced John Riley, who had overseen the upgrade to varsity sport status at UW. With a program only three years old, Johnson went right to work. His first season at UW was winning one (16-10-0), as the Badgers played as a Division I independent, trying to earn admission into the Western Collegiate Hockey Association. Johnson's method was to schedule as many games as possible against WCHA teams, a tough task, but one that would pay large dividends in the long run.

Wisconsin joined the WCHA for the 1969-70 season, and the Badgers suprised the old hands in the league by earning an NCAA tournament bid, the program's first. Johnson's success would continue to build, earning seven NCAA bids in his 15 years at Wisconsin, NCAA titles in 1973, 1977, and 1981, as well as finishing second in 1982. Johnson was named the NCAA Coach of the Year in 1977, as Wisconsin swept the WCHA regular season, playoff, and NCAA tournament titles. These years cemented the "Badger" nickname, which he would carry with him for the rest of his career.

Johnson built the Wisconsin program into a national power from nothing. His UW squads only had two losing seasons during his tenure, both during Olympic years (Johnson was the 1976 U.S. Olympic coach, the Wisconsin team was coached by Bill Rothwell in that season). In 1982, he took the head coaching job for the NHL's Calgary Flames, leaving Wisconsin in the hands of his former assistant, Jeff Sauer. As a testament to Johnson's excellent recruiting and good choice for a replacement, Sauer went on to lead the Badgers to another NCAA title in 1983.

Johnson was not just a strong figure in American college hockey, but also a strong believer in American hockey in general. Johnson coached the 1976 U.S. Olympic team to a fourth place finish in Innsbruck, Austria. He additionally game his time as the head coach for the U.S. Canada Cup teams in 1981, 1984, and 1987, as well as the U.S. National teams in 1973, 1974, 1975, and 1981. After coaching the Flames, Johnson served as the Executive Director of USA Hockey from 1987 to 1989, attempting to further the sport in the United States.

Johnson left Wisconsin in 1982 to coach the Calgary Flames, taking his talents to the highest level. As a testament to his coaching abilities, Johnson led the underdog Flames to the Stanley Cup Finals in 1986, before losing to the vastly superior Montreal Canadiens in five games.

After leaving the NHL temporarily for his position in USA Hockey, Johnson was successfully wooed back into coaching at the NHL level by former 1980 U.S. Olympic assistant coach Craig Patrick. Patrick hired Johnson to coach the extremely talented but constantly bickering Pittsburgh Penguins. In his first season, Johnson's incessant optimism infected the Penguins, getting superstars such as Mario Lemieux to buy into Johnson's system. In 1991, his first season in Pittsburgh, the Penguins won the Stanley Cup over his hometown Minnesota North Stars in six games.

Shortly after Johnson reached the pinnacle of the hockey world, he was diagnosed with brain cancer. The cancer was very advanced, and "Badger" Bob tragically passed away in November 1991, at the age of 60.

Johnson's legacy of success spans all levels of hockey, from high school to college, from the Olympics to the NHL. In 1992, he was inducted into the Hockey Hall of Fame in Toronto. Johnson's legacy is not in doubt, as it includes his love for the game, passion, and enternal optimism. Mike Eaves, who played for Johnson both in college at Wisconsin and in the NHL in Calgary, noted that Johnson would always find the positives to emphasize. While being blown out in Calgary one night, all Johnson could talk about was how well they had moved the puck on one power play. His signature phrase epitomizes that spirit: "It's a great day for hockey!" That phrase, to this day, is memorialized with a banner in Wisconsin's Kohl Center, and on the lockerroom wall in Pittsburgh, just two of the many stops along "Badger" Bob's journey.