The Blind River Beavers are a Junior "A" ice hockey team from Blind River, Ontario, Canada. They are a part of the Northern Ontario Junior Hockey League.

The Beavers first began junior hockey life as the Elliot Lake Vikings of the Northern Ontario Junior Hockey League, purchased by Iain Mills. In 1999, the team's owner picked up his franchise and moved it to Nickel Centre, Ontario. They only played one season in Nickel Centre and again it was not a good one. Again in 2000, the team was moved by Mills and assistant general manager Brent Cooper, but this time to Blind River. They celebrated their franchise's first winning record since 1998-99 during the 2004-05 season. 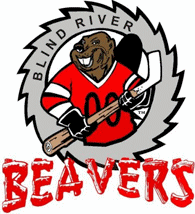 Retrieved from "https://icehockey.fandom.com/wiki/Blind_River_Beavers?oldid=679400"
Community content is available under CC-BY-SA unless otherwise noted.