Ice hockey has several sources of origin and many influences leading to its' 'creation". Similar to the American invention of baseball which has had several different inventors such as Abner Doubleday in Cooperstown, New York and Alexander Cartwright in New York City with influences from British and American games such as cricket, rounders, and a colonial New England game known as "town ball".

The influences of other sports are shown in several versions of the claimants creation of the game.

The modern game of ice hockey has several claimants for it's birthplace:

The Nova Scotia town of Windsor lays claim to being the birthplace of hockey with the first games being played on the town's Long Pond as early as 1804 by students from King's College School.  The game played there was derived from the Irish field game hurley (now known as hurling) which was adapted to the game of ice hurley. The town is home to what is believed to be the oldest arena still standing.  The Stannus Street Rink was build in 1897 located adjacent to Long Pond. The arena is no longer used for ice hockey as it was replaced as the main rink in town when the Hants Exhibition Arena opened in the 1960's. [1]

The former city of Dartmouth, Nova Scotia also lays claim to being the birthplace of the game. Tuft's Cove had historical reports indicating a Mi'kmaq game bearing a resemblance to the game of lacrosse or the Irish game of hurling with aerial passing and a lack of ice skates being played there during the 1700's.  The community would also commerically contribute to the game as the local Mi'kmaq's were known as one of the main producers of sticks for the ice games in the area and Starr Manufacturing which became one of the first and perhaps best known in terms of quality from 1864 until about the outbreak of World War II.[2] 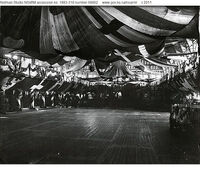 The city of Halifax has reports of games called "ricket" and "wicket" being played in the 1820's and 1830's. These games seem to have a similar characteristic to the English game of Bandy which would make sense as the city had a major British military presence.

The city also was the source of one of the first two sets of rules for the game with the Halifax Rules dating back to the mid-18th century but never being written down.

The city would also lay claim as being host to possibly the first indoor game of ice hockey at the Halifax Skating Rink as early as 1863.[3] 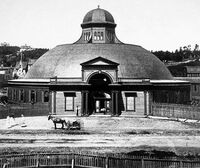 The Montreal Rules or McGill Rules were recorded in the Montreal newspaper The Gazette on February 27, 1877. The rules were similar to the Halifax Rules but were the first definitively recorded rules of the game. James Creighton lived in Halifax and later moved to Montreal is credited with these set of rules.

The early teams in the city were often named after either the rink they played out of or the social club which sponsored the teams. The early history was dominated by English language clubs but would start to become more French with the start of the Montreal Le National in 1903 and subsequently the Montreal Canadiens who were founded on December 4, 1909 and were based out of the Westmount Arena in the primarily anglophone Westmount neigbourhood of Montreal. The team make their legacy out of the Montreal Forum which was originally built for the Monteal Maroons who "represented" the anglophone community in Montreal.

The city was host to what could be called the first hockey truly competitive game of ice hockey when Queen's University and the Royal Military College of Canada engaged in a game in 1886. The rivalry continues to this day. It is symbolized by the Carr-Harris Cup named in honour of Peter Carr-Harris who coached at both institutions and in honour of his contributions to hockey in the local community.[4]

Other Games which influenced ice hockeyEdit

Retrieved from "https://icehockey.fandom.com/wiki/Birthplace_of_ice_hockey?oldid=663034"
Community content is available under CC-BY-SA unless otherwise noted.