William "Bill" Mosienko (November 2, 1921 in Winnipeg, Manitoba, Canada – July 9, 1994) was a Canadian Right Winger who played 14 seasons in the National Hockey League for the Chicago Black Hawks. He is famous for the fastest hat-trick in NHL history, a record that still stands. On March 23, 1952, playing for the Chicago Black Hawks, he scored three goals in 21 seconds against the New York Rangers. He was inducted into the Hockey Hall of Fame in 1965.

Mosienko played junior hockey for the Winnipeg Monarchs and then joined the Black Hawks full-time in 1943-44. He played for the Hawks for 12 straight seasons. He was a member of the famous, high-scoring 'Pony Line' alongside Max & Doug Bentley. In 1944-45 and 1945-46 Mosienko was a second team all star. In 1944-45 he won the Lady Byng Trophy.

He played from 1955-59 for the Winnipeg Warriors of the Western Hockey League. In 1955-56 the team won the Edinburgh Trophy. 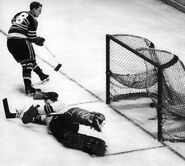