Ice Hockey Wiki
Register
Don't have an account?
Sign In
Advertisement
in: Born in 1917, Dead in 1999, Canadian ice hockey players,
and 10 more 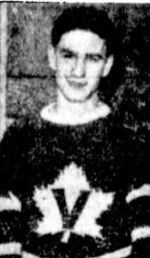 William "Bill, Smiley" Meronek (April 15, 1917 – May 25, 1999) was a Canadian professional ice hockey forward who played 19 games in the National Hockey League for the Montreal Canadiens. He was born in Stony Mountain, Manitoba.

Meronek then played for the senior Montreal Canadiens from 1940 to 1943. In 1942-43 he split the season between the senior and NHL Canadiens, playing only home games for the two teams because of war-work committments. In the NHL that season he scored 3 goals and 6 assists in 12 games.

His total NHL numbers were 5 goals and 8 assists in 19 games.

Meronek continued to play senior hockey in Quebec and the Ottawa district and retired in 1950.