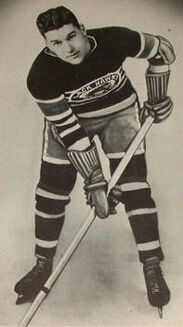 He played two seasons with the junior Elmwood Millionaires (Winnipeg), winning the Memorial Cup in the second season in 1930-31.

MacKenzie started his National Hockey League career with the Chicago Black Hawks in 1932. He also played for the Montreal Maroons, Montreal Canadiens, and New York Rangers.

In January 1935 Bill MacKeznie was loaned to the New York Rangers, for the rest of season, for cash. In the Stanley Cup semi-finals Montreal Maroons defeated the New York Rangers, then defeated the Toronto Maple Leafs in the finals. MacKenzie's name somehow was included on the cup, even though he was a member of Rangers at the time the Maroons won the Stanley Cup. After the season ended Bill was returned to the Maroons.

He began the 1936 with the Maroons, playing 10 games, but was traded to the Montreal Canadiens. Before the start of the 1938 Bill was traded to Chicago. He helped the Blackhawks win the Stanley Cup in 1938 getting his name of the Stanley Cup a second time (although only the first time officially).

He left the NHL after the 1940 season. He played four more seasons with the Cleveland Barons of the American Hockey League before retiring from hockey in 1945. He served 1943-44 in the Canadian Army.

Retrieved from "https://icehockey.fandom.com/wiki/Bill_MacKenzie?oldid=460827"
Community content is available under CC-BY-SA unless otherwise noted.