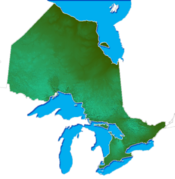 The Battle of Ontario is a rivalry between the Toronto Maple Leafs and the Ottawa Senators of the National Hockey League, often described as one of the top NHL rivalries.[1] The teams compete in the same division and meet frequently during regular season games and Stanley Cup playoffs.

Games between Ottawa and Toronto ice hockey teams date back before the founding of the NHL, and both the Leafs and the original Senators were founding teams of the NHL. Both cities, along with Montreal, also have histories of Stanley Cup winners. Teams from Ottawa and Toronto once met in a series for the Stanley Cup in February, 1904, with the Ottawa Silver Seven defeating the Toronto Marlboros. After the original Ottawa NHL franchise folded, Ottawa-area hockey fans became mainly fans of either the Montreal Canadiens, the Maple Leafs, or other NHL teams. A Toronto-Ottawa sports rivalry continued during this time, however, between the Toronto Argonauts and Ottawa Rough Riders of the Canadian Football League (CFL).

The modern Senators entered the NHL in 1992, but the rivalry between the two teams did not begin to emerge until the late 1990s. From 1992 to 1998, Toronto was in the league's Clarence Campbell/Western Conference and Ottawa was in the Prince of Wales/Eastern Conference, which meant that the two teams rarely played each other. But before the 1998–99 season, the conferences and divisions were re-aligned, and Toronto was moved into the Eastern Conference's Northeast Division with the Senators, Canadiens, Boston Bruins, and Buffalo Sabres.

By 1999, both Ottawa and Toronto were elite Eastern Conference teams, annually competing for the division title. Not all Leafs fans in the Ottawa area became Senators fans upon the revival of the Ottawa NHL franchise. This has resulted in a base of Maple Leafs fans who attend Leafs-Senators games in Ottawa.

In 2000, the teams met for the first time in the playoffs, with the Maple Leafs dispatching the Senators in six games. Some Leafs fans saw this as revenge, since the Sens' Marián Hossa had accidentally clipped the Leafs' Bryan Berard in the eye on March 11, nearly ending the young defenceman's season and almost his career.

The next season, they met again in the first round as Ottawa entered the playoffs ranked 2nd in the East and the Maple Leafs 7th. While the Senators were expected to defeat the Maple Leafs, especially since they had swept the regular season series against them, the Leafs swept the series in a major upset instead; Ottawa did not score their first goal of the series until 16:51 of the third period in the third game.

In 2002, the teams met in the playoffs for the third straight year. The two teams were very evenly matched, and the Maple Leafs managed to win the second-round series in the full seven games and advance to the conference finals. One incident happened late in Game Five when Sens captain Daniel Alfredsson hit forward Darcy Tucker in what Toronto called a hit-from-behind, and then seconds after hitting Tucker in the Leafs zone, he scored the game-winning goal. Tucker suffered an injury on the play, and Alfredsson was not penalized or suspended for it. Tucker had gotten his share of hatred in the first round against the New York Islanders when he wasn't penalized for a hit that dislocated the right knee of the Isles' Michael Peca. That play, despite no punishment for Tucker, was still included in a video of "unacceptable plays" that the NHL sent to all its teams.

In 2003, the rivalry hit an all-time high when Tucker attacked the Senators' Chris Neil, who was sitting on the bench. This resulted in numerous players exchanging punches before order was restored. Tucker, Neil and Hnidy all received fighting majors and game misconducts for the same incident. After the game, Tucker claimed Neil spit on him, an allegation which Neil denies. The NHL board looked into this claim and concluded that Neil did not do this. Tempers remained frayed, especially with 1:23 to play, when Toronto's Tie Domi jumped Magnus Arvedson from behind and threw several punches at Arvedson. Domi received a roughing minor, instigator minor, fighting major, misconduct and game misconduct. Arvedson did not get a penalty on the play. The suspensions were announced a few hours after Tucker and Domi appeared at NHL head offices in Toronto for a hearing. Tucker was suspended for five games, without pay, and it was made clear at the hearing that Neil did not spit at Toronto's bench. Domi was suspended for three games, also without pay. A total of 163 minutes in penalties were called in the game. The Maple Leafs went on to win the season series, but the Sens still topped off the NHL.[2][3]

Another incident in the regular season fueled the rivalry even more. On January 6, 2004, the Maple Leafs were playing a game against the Nashville Predators, when Leaf captain Mats Sundin's stick broke on an attempted shot at the blue line and he threw it away in disgust. Instead of hitting the glass, the stick went over and into the crowd. The NHL reacted by giving him a one-game suspension.[4] The game he was suspended for was a game against the Senators in Toronto. During the game, Daniel Alfredsson's stick broke, and immediately he faked a toss of his stick into the stands. This caused an uproar with the Maple Leafs, in part because they had also lost the game badly, by a score of 7–1. Alfredsson dismissed the Leafs' reaction, calling it an over-reaction. This incident added to the rivalry, and Leafs fans continue to boo Alfredsson at games in Toronto.[5]

Ottawa and Toronto matched up in the playoffs for the fourth time in five years in 2004. Alfredsson guaranteed a victory after the Leafs took game 5. He delivered on his promise in game 6, but the Sens turned in a lacklustre performance in the series finale. The Leafs beat the Senators in the series. After the NHL lockout the Senators goalie Patrick Lalime was traded to the St. Louis Blues, and Ottawa head coach Jacques Martin was fired after the series.

In 2006, the two teams nearly met again in the playoffs, but the Maple Leafs missed qualifying by two points. As the Senators clinched the top spot in the East, the Maple Leafs claiming eighth position would have ensured a first-round match-up.[6] The Sens largely dominated the season series by winning 7 of the 8 games (including 3 routs of 8–0, 8–2, and 7–0).[7]

In 2007, the Leafs nearly qualified for the playoffs, but finished in ninth position, and thereby missing out, for a second consecutive year.[8] Meanwhile, the Senators made it to the Stanley Cup Finals.[9]

The 2007-08 season was characterized by a share of lopsided victories by the two teams against each other; for example, wins of 5-0 and 8-2.[10] The Leafs failed to make the playoffs for the third straight season, this time by 11 points. Ottawa had also been struggling going into the post-season, finishing in 7th place in the East after a 15–2 start and leading the league at one point,[11] barely making it into the playoffs.[12] The Sens were swept 4–0 in the first round by the Pittsburgh Penguins, in a rematch of the previous year's series.[13] Although Pittsburgh was heavily favoured to win, the fact that the Leafs' Mark Bell laid what Jason Spezza described as a "clean dirty hit" on Alfredsson in the April 3 game at Toronto, thereby sidelining him, may have worsened their situation. [14][15]

The 2008-09 season was a poor one for both teams, with the Senators finishing 11th and the Maple Leafs 12th in the Eastern Conference. This marked the first time that both Ontario teams failed to qualify for the Stanley Cup Playoffs since the Senators joined the National Hockey League in 1992.

Retrieved from "https://icehockey.fandom.com/wiki/Battle_of_Ontario?oldid=126313"
Community content is available under CC-BY-SA unless otherwise noted.