He won 2 Stanley Cups, in 1926 with the Montreal Maroons and with the New York Rangers in 1933. He was appointed head coach of the Montreal Canadiens. Tragically, he died at the age of only 35 in a drowning accident, in Lake Huron, shortly after he was hired before the 1939–40 season started. This left his family in such financial distress that the NHL held a memorial game for him, the third all-star game in NHL history. He was inducted into the Hockey Hall of Fame in 1964.

While with the Maroons, Babe was the left-winger of the potent "S Line". Hooley Smith played right wing and Nels Stewart centred the line. 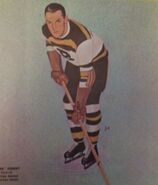 Babe Siebert sporting the Black and Gold in 1935.