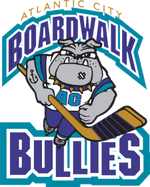 The Atlantic City Boardwalk Bullies was an ECHL hockey team located in Atlantic City, New Jersey, that played from 2001 to 2005. The team's venue was the historic Boardwalk Hall, which seats 6,979.

In 2001, the franchise played its inaugural season in Atlantic City after relocating from Birmingham, Alabama, where it was known as the Birmingham Bulls. In 2003, the team won the Kelly Cup, beating the Columbia Inferno in the finals.

Even though the Bullies found success on the ice, the team failed to draw strong attendance. In its championship season, attendance averaged slightly above 3,000 per game. During the 2005 season, the franchise was sold to an ownership group from Stockton, California. The team became the Stockton Thunder beginning with the 2005–06 season.