The Atlanta Gladiators are a minor league ice hockey team playing at the Gas South Arena in Duluth, Georgia, United States. The team was originally the Mobile Mysticks who played in Mobile, Alabama from 1995 to 2002 and moved to Gwinnett County in 2003. The Gladiators were affiliated with the Atlanta Thrashers of the NHL from the Gladiators' inception in 2003 until the Thrashers' dissolution in 2011, when the franchise was sold and moved to Winnipeg, Manitoba to become the current Winnipeg Jets. The Gladiators play in the Southern Division of the Eastern Conference. The Gladiators made an appearance in the 2006 Kelly Cup Finals, losing to the Alaska Aces in five games. On September 9, 2015 the team announced they were changing their name to the Atlanta Gladiators to allow fans to identify the team as the metro Atlanta area's team not just Gwinnett's. 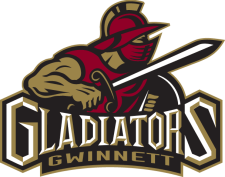