"Cougars" is the name of the sports teams of Assiniboine Community College, located in Brandon, Manitoba. Its teams compete in the Manitoba Colleges Athletic Conference (MCAC). The MCAC has not operated a hockey league since 2009-10.

In the 1970s and 1980s the Cougars played college hockey in the Midwest International College Hockey League and in the Manitoba Colleges Athletic Association until disbanded in 1986. When there was no college league for them they played in the SouthWest Hockey League (SWHL). They no longer operate at any level.

No SWHL records are available on Wikia for the seasons played by the Cougars.

Note: No season records are available on Wikia for the MCAA, MCIHL, or CPAC seasons. 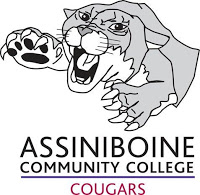 Retrieved from "https://icehockey.fandom.com/wiki/Assiniboine_College_Cougars?oldid=584580"
Community content is available under CC-BY-SA unless otherwise noted.