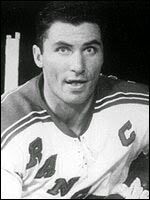 Records once held by Andy Bathgate

Fern Flaman defends against Rangers Andy Bathgate during the Bruins 2-1 win on March 13, 1957.