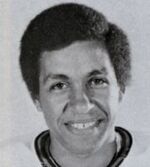 White is best known for being the second player of African descent, after Willie O'Ree, to have played on a professional major league ice hockey team and for being the first hockey player of African descent to score 20 goals in a single season for a major league team. He scored 21 goals and 21 assists for the Los Angeles Sharks during the 1972-73 season. Also during the 1972-73 season, he became the first black player to score a Hat-trick in a major league professional game. He accomplished the feat on March 1, 1973 against the Minnesota Fighting Saints in an 4-1 victory.

White's WHA career only lasted two more seasons, seeing him suit up for the Sharks in the 1973-74 WHA Season before moving on to the Michigan Stags/Baltimore Blades franchise. In 145 WHA games, White recorded 38 goals and 46 assists.