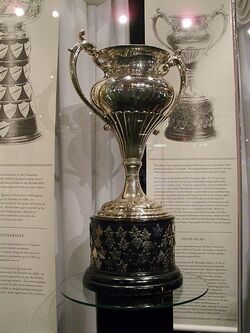 The Allan Cup was donated by Sir Montagu Allan in 1908. It is awarded to the Senior/Senior AAA amateur men's hockey champions of Canada.

Until 1918-19 this was a challenge cup, which accounts for some multiple winners in the early seasons.

The tournament then used a East-West format until 1991 where the Eastern champion would meet the Western champion.

Since 1992, the tournament has been a round robin tournament involving a host team and anywhere from 3 to 5 other regional qualifiers.

Speculation on a change in format has been talked about as early as the 2019 tournament as the qualifying format for the tournament was unfair as some teams had bids to the tournament confirmed and other teams had to endure multiple rounds of qualifying at the league/provincial/regional levels.  A return to an East-West format would hopefully make qualifying a little more equitable by not having set regions where only one team might qualify be default and a host team also automatically qualifying.

Hockey Canada has a traditional practice of giving unused tournament spots in tournaments to the host branch.  This practice has caused some regions to have a possibility of having three entries out of six in the tournament. The possibility existed in 2019 that Alberta could have three teams in the tournament but Hockey Canada gave the unused Eastern spot (Quebec) to the Western region (Manitoba-Saskatchewan) as they would have been the only region with the need for an inter-branch qualifier to determine the region's qualifier for the tournament.

The 2020 tournament was announced with two host teams which has likely created the possibility of better attendance, as four of the games (of the six round robin games) will be played by teams playing in their home arenas. With the absence of an entry from the Eastern Region (Quebec) a modification of the qualifying will not be needed as only four qualifying spots are being contested. Eleven teams are competing for the Allan Cup and two host and the Atlantic region representative had already qualified for the Allan Cup tournament. Of the eight remaining teams the the Manitoba based teams would have to win two or three series to qualify while the two Alberta teams, the single Saskatchewan teams and likely the two Ontario based teams would each have to win one series to qualify. The method of determination of the Central region (Ontario) qualifier has not been determined if it will be the further advancing teams in the Allan Cup Hockey playoffs of if the two teams will meet in a separate qualifier for the Allan Cup berth as the other two members of the league as automatically qualified as co-host teams.

Winners of the Allan Cup