Ice Hockey Wiki
Register
Don't have an account?
Sign In
Advertisement
in: Articles without Wikidata item, Born in 1935, Atlanta Flames coaches,
and 19 more

MacNeil played two seasons with the Toronto Marlboros in 1954-55 and 1955-56, The Marlboros won the Memorial Cup in both seasons.

Upon retiring as a player, MacNeil turned to coaching with the Montreal Voyageurs of the American Hockey League, top farm club of the Canadiens, for the 1969-70 season. After a successful debut, MacNeil became an assistant coach to Claude Ruel of the NHL Canadiens for the 1970-71 season.

During that season, the Habs were stunned by the temporary retirements of left wing John Ferguson and defenceman Terry Harper and struggled for a good portion of the season, at one point in danger of missing the playoffs for a second straight year. Ruel resigned and MacNeil took the helm; meanwhile, the club swung a major trade to net top scoring left wing Frank Mahovlich from the Detroit Red Wings. The Canadiens rallied to qualify for the playoffs as third seed in their division, then MacNeil led the team to an unexpected Stanley Cup championship. The Habs stunned the heavily favoured Boston Bruins in the opening round of the playoffs, and then defeated the Minnesota North Stars and Chicago Black Hawks, winning the latter series after having been behind 3–2.

Crucial to the Stanley Cup victory was MacNeil's decision to use rookie goaltender Ken Dryden in the playoffs despite Dryden having played only six regular-season games in 1970–71. MacNeil was presumably impressed that Dryden won all these games, allowing only nine goals (1.65 GAA). Another crucial choice was having rookie Rejean Houle check the Black Hawks' goalscorer Bobby Hull. Houle was nicknamed the "shadow of Bobby Hull" as Hull managed to score only one even-strength goal in the series.

Unfortunately, MacNeil had a frosty relationship with most of the team's francophone players, most notably Henri Richard. When MacNeil benched Richard during the final series against the Black Hawks, Richard publicly criticised the coach. In game seven held at Chicago, after being down 2–0 for the first two periods, the Canadiens scored three goals in the third to take the series and the championship, with Richard scoring both the equalizer and game winner. MacNeil and Richard hugged at the end of the game, but that did little to patch up their differences. Richard was a highly admired and respected veteran of the team, so MacNeil was demoted to head coach of the Canadiens' American Hockey League affiliate, the Nova Scotia Voyageurs. MacNeil won three Calder Cup Championships (1972, 1976, 1977) in six years with the Voyageurs.

He later returned to the Canadiens winning two more Stanley Cups as Director of Player Personnel in 1978 and 1979.

In 1979, MacNeil took over the Atlanta Flames, just before the team moved to Calgary. He lasted three seasons as head coach of the Calgary Flames before moving into a number of management-related capacities within the Flames organization. MacNeil won his fourth Stanley Cup in 1989 as Calgary's assistant general manager

On December 10, 2001, MacNeil returned to head coaching duties after almost two decades when the Flames head coach at the time, Greg Gilbert, was suspended for a period of two games for his role in a brawl in a game with the Mighty Ducks of Anaheim. When Gilbert was fired in the next season due to the Flames' poor performance, MacNeil once again assumed interim head coaching duties before Darryl Sutter was hired.

MacNeil has been involved in professional hockey for more than 50 years as a player, coach, assistant manager and director of hockey operations.

Twice the team he was captain of won the playoff trophy. 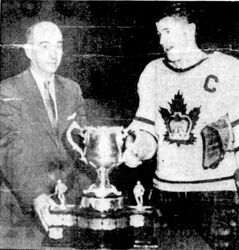 MacNeil being presented with the Memorial Cup in 1956 as the captain of the Toronto Marlboros. 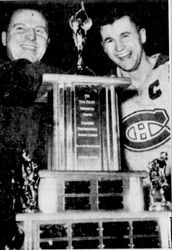 MacNeil, captain of the Hull-Ottawa Canadiens, is awarded the Tom Foley Memorial Trophy in 1961. The team had just won the Eastern Professional Hockey League playoff title.