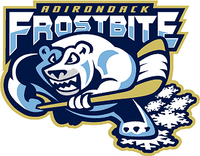 The Adirondack Frostbite were a professional ice hockey team in the United Hockey League (UHL). They played their home games at the Glens Falls Civic Center in Glens Falls, New York.

UHL action came to Glens Falls in 1999, when the American Hockey League's Adirondack Red Wings disbanded. In 2000 hockey returned to the area with the UHL Adirondack IceHawks. In 2004, ESPN SportsCenter anchor Steve Levy and NHL analyst Barry Melrose became the team's owners and the team changed its name to the Frostbite.

On January 13, 2006, head coach Marc Potvin was found dead in his hotel room in Kalamazoo, Michigan hours before his team was to play the Kalamazoo Wings.

The Frostbite suspended operations on June 12, 2006 after the team could not come to a lease agreement with the Glens Falls Civic Center. Professional hockey would not return to the Adirondack region until 2009, when the Adirondack Phantoms (formerly the Philadelphia Phantoms) of the AHL relocated to the arena.

Retrieved from "https://icehockey.fandom.com/wiki/Adirondack_Frostbite?oldid=88288"
Community content is available under CC-BY-SA unless otherwise noted.