The Seventh National Hockey League All-Star Game took place at the Montreal Forum, home of the Montreal Canadiens, on October 3, 1953. The Canadiens, winner of the 1953 Stanley Cup Finals, played a team of All-Stars, with the All-Stars winning the game, 3–1. 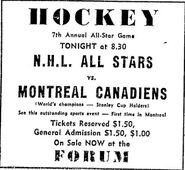 Retrieved from "https://icehockey.fandom.com/wiki/7th_National_Hockey_League_All-Star_Game?oldid=317932"
Community content is available under CC-BY-SA unless otherwise noted.