The Third National Hockey League All-Star Game took place at Maple Leaf Gardens, home of the Toronto Maple Leafs, on October 10, 1949. For the third year in a row, the game saw the Maple Leafs play a team of NHL All-Stars. The All-Stars won the game by a scored of 3–1, the same as the previous game with the winning goal again being scored by a member of the Boston Bruins, Paul Ronty.

The jerseys were the same as the previous two years except a small "1949" was added to the NHL shield. 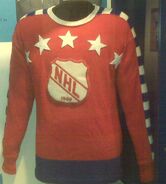 Jersey worn by Maurice Richard during the 1949 game.

Retrieved from "https://icehockey.fandom.com/wiki/3rd_National_Hockey_League_All-Star_Game?oldid=670037"
Community content is available under CC-BY-SA unless otherwise noted.