The 22nd National Hockey League All-Star Game was held on January 21, 1969 in the Montreal Forum in Montreal, Quebec, the home of the Montreal Canadiens.

Al Arbour made his debut in the All-Star Game at age 36, the eldest to debut in the Game to that date. Toe Blake, who had retired after the Canadiens' championship, came out of retirement to coach the East Division. [1] Bobby Orr wore jersey #2 as the more senior Jean Béliveau wore jersey #4. Bobby Hull wore a helmet in this game. 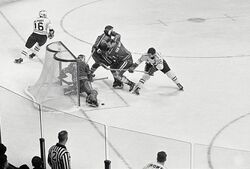 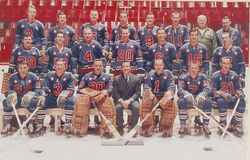 West Division All-Stars
Add a photo to this gallery

The last three goals of the game are shown.

1969 NHL All-Star Game
Add a photo to this gallery

Retrieved from "https://icehockey.fandom.com/wiki/22nd_National_Hockey_League_All-Star_Game?oldid=679753"
Community content is available under CC-BY-SA unless otherwise noted.