This is the 2019-20 Manitoba Junior Hockey League Season, the League's hundred and third season. 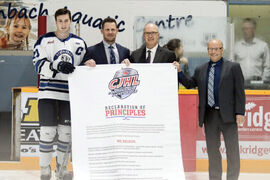 CJHL announced the Steinbach Pistons organization have won the prestigious 2018-19 Canadian Junior Hockey League Declaration of Principles Award. The Declaration of Principles was created by the National Hockey League and the NHL Player’s Association to inspire fans, players, and communities to create the best possible experience for the entire hockey community. The Pistons volunteered 1,300 hours of their time during the season to connect with Steinbach and the surrounding communities.

Retrieved from "https://icehockey.fandom.com/wiki/2019-20_MJHL_season?oldid=709127"
Community content is available under CC-BY-SA unless otherwise noted.