Hockey Manitoba had the Champions of Manitoba’s 5 Senior Leagues, plus a wildcard team (rotated between the leagues) faceoff for the Manitoba Championship, the Manitoba Cup.
The tournament was held April 10 to 19, with opening games held at the Access Centre in Morden and the Riverdale Community Centre in Rivers. Then a couple of games at the PCU Centre in Portage and the final five, including playoffs, at the MTS Iceplex in Winnipeg.

Note: Steinbach Huskies Champions of the Carillon Senior Hockey League withdrew as a number of their players were also playing for the South East Prairie Thunder, who were involved in the Allan Cup playoffs. 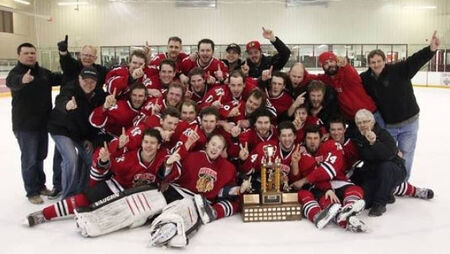 Retrieved from "https://icehockey.fandom.com/wiki/2015_Manitoba_Senior_A_Hockey_Playoffs?oldid=533884"
Community content is available under CC-BY-SA unless otherwise noted.