Hockey Manitoba had the Champions of Manitoba’s 5 Senior A Leagues, plus a wildcard team (rotated between the leagues) playoff for the Manitoba Championship, the Manitoba Cup. 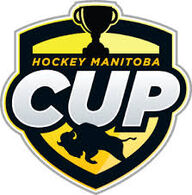