The 2013 Memorial Cup was a four-team, round-robin format tournament played in May 17–26, 2013. The tournament  featured the league champions of the Ontario (London Knights) , Quebec (Halifax Mooseheads) and Western (Portland Winterhawks) hockey leagues, and the host Saskatoon Blades, who won the right to host the tournament over bids by the Kelowna Rockets and the Red Deer Rebels.[1] This was the first Memorial Cup to be held in Saskatoon since the Blades hosted it in 1989. 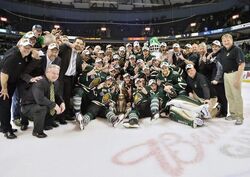 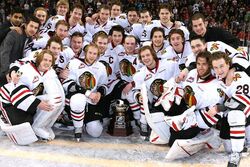 Halifax Mooseheads
Add a photo to this gallery

Retrieved from "https://icehockey.fandom.com/wiki/2013_Memorial_Cup?oldid=614585"
Community content is available under CC-BY-SA unless otherwise noted.