The 2013 Frozen Four took place April 11 and April 13, 2013 in Pittsburgh, Pennsylvania, at the Consol Energy Center. It was hosted by Robert Morris University, and it was the first Frozen Four to take place in the state of Pennsylvania. 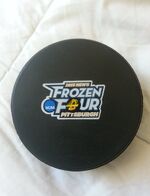 Retrieved from "https://icehockey.fandom.com/wiki/2013_Frozen_Four?oldid=644051"
Community content is available under CC-BY-SA unless otherwise noted.