The 2013 Calder Cup playoffs of the American Hockey League began on April 26, 2013, with the same playoff format that was introduced in 2012. The sixteen teams that qualified, eight from each conference, will play a best-of-five series in the conference quarterfinals, and the playoffs will then continue with best-of-seven series for the conference semifinals, conference finals and Calder Cup finals.

Note 1: All times are in Eastern Time (UTC-4).
Note 2: Game times in italics signify games to be played only if necessary.
Note 3: Home team is listed first.

The Penguins became the third team in AHL history, along with the 1960 Rochester Americans and 1989 Adirondack Red Wings to come back from a 0–3 series deficit and win a best of seven playoff series, and the first team to then win Game 7 on the road.

The game scheduled for May 31 was postponed because of dangerous weather conditions around the Cox Convention Center.[1]

These are the top ten skaters based on points. If there is a tie in points, goals take precedence over assists.[2] 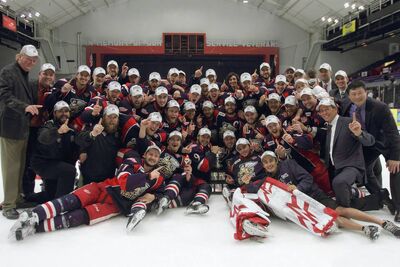