Start a Wiki
The 2013 Allan Cup was the 2013 Canadian Grand National Championship of Senior ice hockey. This was the 105th year the trophy will be awarded. The 2013 Allan Cup was contended in Red Deer, Alberta, hosted by the Bentley Generals of Hockey Alberta from April 15 to April 20, 2013.[1]

Late in the third period of the round robin game between Bentley and Rosetown, the Generals were leading 1-0 with less than a minute to play. Generals goalie Dan Bakala shot the puck the length of the ice into an empty net to score a goal. It is unknown if this rare event is the first in Allan Cup history. 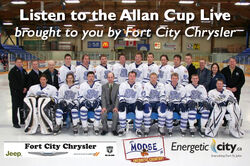 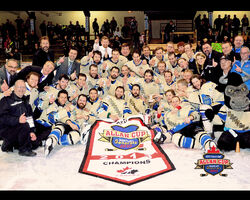 Retrieved from "https://icehockey.fandom.com/wiki/2013_Allan_Cup?oldid=644347"
Community content is available under CC-BY-SA unless otherwise noted.