The Augusta RiverHawks have suspended operations for the 2013-14 season due to failure of the ice system at the James Brown Arena. Team officials, the city of Augusta, and Global Spectrum could not reach an agreement on repairing or replacing the JBA's ice system in time for the club to commit to the forthcoming season.[2]

On May 15, 2013, it was announced that the CHL's Bloomington Thunder (formerly known as the Blaze[3]), along with the AHL's Peoria Rivermen, would move to the Southern Professional Hockey League for the 2013–14 season. The Rivermen had been notified that the Vancouver Canucks, who had purchased the team a month earlier, would not keep them in Peoria. The two teams will reportedly be owned by two former Rivermen executives, John Butler, Bart Rogers and David Holt with financial backing from former Rivermen owner Bruce Saurs.[4]

All times are local (EDT/CDT) 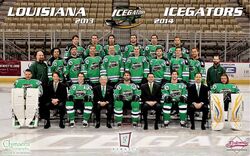 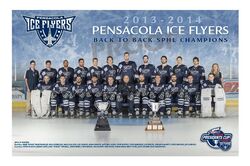