The Royal Bank Cup was competed for by the winners of the Doyle Cup, Anavet Cup, Dudley Hewitt Cup, the Fred Page Cup and the host team, the Humboldt Broncos of the Saskatchewan Junior Hockey League.[1]

The tournament was hosted by the Humboldt Broncos which will see the round robin begin on May 5, 2012 and have the final played on May 13, 2012. Tournament games was played at the Elgar Peterson Arena in Humboldt, Saskatchewan. Like every other year of the RBC round robin, it consisted of 5 teams in 2012.

Since the Humboldt Broncos were the 2012 SJHL regular season champions and playoff champions, the Broncos would still move on to compete for the 2012 Anavet Cup. The Broncos would turn out to be successful in the best of 7 2012 Anavet Cup series, defeating the 2012 MJHL playoff champion the Portage Terriers 4-3. Since the Humboldt Broncos are hosting the 2012 RBC, the Portage Terriers would still receive a ticket to the tournament because every year during the RBC tournament the host teams automatically play even if they missed or lost out of the playoffs early.[2]

The Penticton Vees of the BCHL entered the tournament as BCHL and Doyle Cup champions, with a BCHL record 42-game winning streak under their belt from earlier in the year. While breaking the BCHL record, the Vees rivaled but did not surpass the nationwide Junior A records of the 1999-2000 Rayside-Balfour Sabrecats (49 games, NOJHL), 1989-90 Sudbury Cubs (48 games, NOJHL), or 1981-82 Flin Flon Bombers (46 games, NJHL).

The Penticton Vees would win their second ever National Junior A Championship with a 4-3 come-from-behind victory over the Maritime Junior A Hockey League's Woodstock Slammers. The Vees led 2-0, but the Slammers stormed back to take a 3-2 lead past the halfway point of the third. Soon after, the Vees scored to tie it in a game that seemed destined for overtime. In the final eight and a half minutes of play, the referees called three consecutive penalties against the Slammers inwhich the Vees scored in the final minute of the final power play with 51 seconds remaining in the game to clinch the Royal Bank Cup. During the regular season, the Vees and Slammers were both nationally ranked #1 teams for most of the season, setting up a very evenly matched final.

All games at the Elgar Peterson Arena in Humboldt, SK. 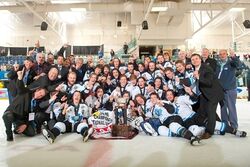 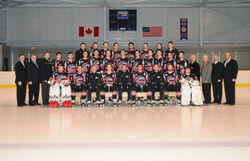