The 2012 Frozen Four took place April 5 and April 7, 2012 in Tampa, Florida, at the St. Pete Times Forum. It was hosted by the University of Alabama-Huntsville, and it was the first Frozen Four to take place in the state of Florida. 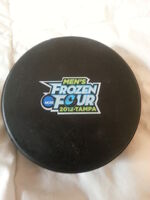 Retrieved from "https://icehockey.fandom.com/wiki/2012_Frozen_Four?oldid=644050"
Community content is available under CC-BY-SA unless otherwise noted.