The 2012 Calder Cup playoffs of the American Hockey League began on April 19, 2012 with a slightly different playoff format than in other recent years. The sixteen teams that qualified, eight from each conference, will play a best-of-five series in the conference quarterfinals, and the playoffs will then continue with best-of-seven series for the conference semifinals, conference finals and Calder Cup finals.

The Norfolk Admirals defeated the Toronto Marlies in four games to win the Calder Cup for the first time in Norfolk's history.

Note 1: All times are in Eastern Time (UTC-4).
Note 2: Game times in italics signify games to be played only if necessary.
Note 3: Home team is listed first.

* Game five was played at the Webster Bank Arena in Bridgeport.

These are the top ten skaters based on points. If there is a tie in points, goals take precedence over assists.[1] 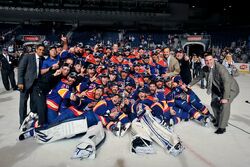 Norfolk Admirals
Add a photo to this gallery

Leafs TV, as the main broadcaster of the Toronto Marlies, will air the Calder Cup Final in Canada. While the channel is normally restricted to the home market of the Toronto Maple Leafs, Leafs TV has allowed television providers outside of the Leafs' market to carry the channel during the Calder Cup to allow nationwide coverage of the games. In the United States, CBS Sports Network picked up the broadcast rights in the United States beginning with game 3, simulcasting the Leafs TV feed. Additionally in Canada, Sportsnet One will also join Leafs TV to air games 4-6 of the series. The series will also be carried on ESPN America, and on the NHL Home Ice channel on Sirius XM.[3]

Retrieved from "https://icehockey.fandom.com/wiki/2012_Calder_Cup_playoffs?oldid=305652"
Community content is available under CC-BY-SA unless otherwise noted.