This is the 2012-13 Quebec Major Junior Hockey League season standings.

The Sherbrooke Phoenix are an expansion team. They "replace" the Lewiston MAINEiacs who were disolved by the league after the 2010-11 season. The Phoenix were stocked by an expansion draft held June 6, 2012. They will play out of the Palais des Sports Léopold-Drolet . Patrick Charbonneau will be the general manager and Judes Vallée will serve as head coach. 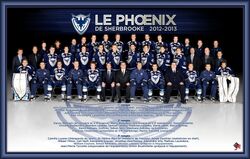 Sherbrooke Phoenix
Add a photo to this gallery

Retrieved from "https://icehockey.fandom.com/wiki/2012-13_QMJHL_Season?oldid=394836"
Community content is available under CC-BY-SA unless otherwise noted.