The 2012–13 AHL season is the 77th season of the American Hockey League. The regular season began on October 12, 2012 and ended on April 21, 2013. The 2013 Calder Cup playoffs followed the conclusion of the regular season. The Calder Cup was won by the Grand Rapids Griffins for their first Calder Cup in franchise history.

On June 28, the Board of Governors approved a minor realignment for the league for the 2012–13 season. The only changes were made in the Western Conference, as three teams swapped divisions for this season: Abbotsford moves to the North Division, Grand Rapids moves to the Midwest Division and Charlotte moves to the newly-renamed South Division (formerly West Division). The Eastern Conference remains the same as the previous season. Among the rule changes for this season, the league has adopted video-review for goals, which has been in use in the NHL for years.[1]

Because of the 2012–13 NHL lockout, all NHL players who were still eligible to play in the AHL without clearing waivers were assigned to their AHL teams for the duration of the lockout. The lockout also forced the cancellation of one of the two AHL Outdoor Classics for 2012; as a result, there was only one Outdoor Classic in 2013. The Hershey Bears hosted the Wilkes-Barre/Scranton Penguins at Hersheypark Stadium on January 20. The Penguins won the game 2–1 in overtime before a crowd of 17,653 spectators.

As a result of the aforementioned lockout, the Rochester Americans moved a portion of its home schedule to the First Niagara Center in Buffalo, New York to fill the void of its parent club, the Buffalo Sabres, during the lockout (both teams are owned by Terrence Pegula). The team's name and branding remain unchanged.

The following players are sorted by points, then goals. Updated as of the end of the regular season.[2]

The following goaltenders with a minimum 1500 minutes played lead the league in goals against average. Updated as of the end of the regular season.[3] 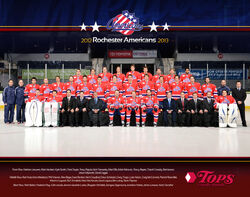 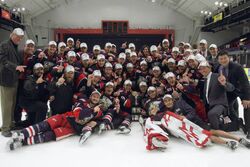