Following the 2011–12 CHL season the number of the teams in the CHL fell from 14 to 10, with the Ray Miron President's Cup-holding Fort Wayne Komets moving to the ECHL along with the Evansville IceMen, the Dayton Gems moved to the Federal Hockey League becoming the Dayton Demonz, the Rio Grande Valley Killer Bees ceased operations, the Laredo Bucks were moved to St. Charles, Missouri, and will rejoin the league as the St. Charles Chill in the 2013–14 CHL Season. The Denver Cutthroats joined the CHL to play in their inaugural season. The Texas Brahmas reverted to the previously used Fort Worth Brahmas moniker. The CHL played the 2012–13 season with a single conference known as the Berry Conference, rather than its previous two-conference system consisting of the Berry and Turner conferences. For the 2013–2014 the league will add its first ever Canadian team in Brampton, Ontario, just north of Toronto. 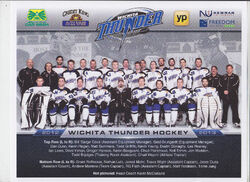