The Majors won the right to host the event over the Barrie Colts, Kingston Frontenacs and Windsor Spitfires.[1]

The Saint John Sea Dogs defeated the Mississauga St. Michael's Majors 3–1 in the final to win the title for the first time. Saint John is the first team based in the Canadian Maritimes to win the Memorial Cup.

Note: Kootenay finished 4th based on head to head round robin matchups but defeated Owen Sound in the tiebreaker game. 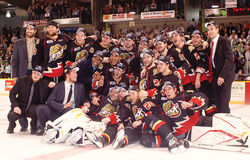 Retrieved from "https://icehockey.fandom.com/wiki/2011_Memorial_Cup?oldid=614579"
Community content is available under CC-BY-SA unless otherwise noted.