The 2011–12 QMJHL season is the 43rd season of the Quebec Major Junior Hockey League (QMJHL). The regular season, which consists of seventeen teams playing 68 games each, began in September 2011 and ended in March 2012. This season is Blainville-Boisbriand Armada's first season in the league, as the team relocated to Boisbriand from Verdun where they played as the Montreal Junior Hockey Club from 2008 to 2011. 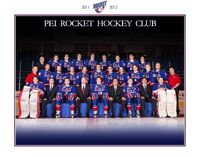