Ice Hockey Wiki
Register
Don't have an account?
Sign In
in: Pages with template loops, Article with short description, SM-Liiga season, 2012 in hockey

Each team played four times against every other team (twice home and twice away), getting to 52 games. Additionally, the teams were divided to two groups, where teams would play one extra game. One group included Blues, HIFK, Jokerit, JYP, KalPa, Pelicans and SaiPa, while other had HPK, Ilves, Kärpät, Lukko, Tappara, TPS and Ässät.

Additionally, there were two games where teams could choose the opponents. These were played back-to-back in January and the choices were made in December, with team with lowest point total to that date was able to choose first. These pairs were: Ilves-Tappara, SaiPa-HPK, TPS-Lukko, Kärpät-Blues, JYP-HIFK, Jokerit-Pelicans and Ässät-KalPa. 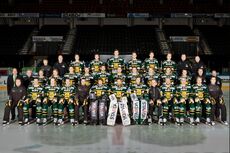