The 2011–12 GET-ligaen is the seventy-second season of Norway's premier ice hockey league, Eliteserien (known as GET-ligaen for sponsorship reasons).

The season began on 10 September 2011 with the final round of the regular season played on 1 March 2012.[1] The Stavanger Oilers won their first league championship after beating Frisk Asker on 2 February.[2] With a total of 112 points, the Oilers broke the previous record of 108 points held by the Sparta Warriors (2011) and Storhamar Dragons (2006).[3] Lørenskog finished as runners-up ahead of Vålerenga.

The playoffs to determine the 2012 Norwegian champions began on 4 March 2012 and ended on 13 April 2012.[4] Stavanger defeated Lørenskog by 4 games to 2 in the finals to claim their second Norwegian Championship title in three seasons. The playoffs were contested by the top eight teams in the regular season.

Qualification for the final two berths in the 2012–13 GET-ligaen was held between 8 March and 24 March 2012. The Tønsberg Vikings won the tournament and gained promotion to the GET-ligaen for the first time in the team's history.[5] Frisk Asker secured the runner-up spot and continued play at the top level; Manglerud Star was relegated to the 1. divisjon.

Overall attendance surpassed 400,000 for the first time in league history.

These were the top ten skaters based on points.[6] If the list exceeds ten skaters because of a tie in points, all of the tied skaters are shown.

These were the top five goaltenders based on goals against average.[7]

After the regular season, the standard of eight teams qualified for the playoffs. In the first and second rounds, the highest remaining seed chooses which of the two lowest remaining seeds to be matched against. In each round the higher-seeded team is awarded home ice advantage. Each best-of-seven series follows a 1–1–1–1–1–1–1 format: the higher-seeded team plays at home for games 1 and 3 (plus 5 and 7 if necessary), and the lower-seeded team at home for games 2, 4 and 6 (if necessary).[4]

After the regular season, the two lowest ranked teams must compete against the two highest ranked teams from the 1. divisjon for the right to play in the 2012–13 GET-ligaen. This tournament is organized according to a double round robin format: each club plays the others twice, home and away, for a total of six games. The points system and ranking method used are the same as in the GET-ligaen. At the end of the tournament, the winner and runner-up qualify for the next season.[8] 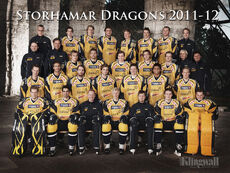 Lørenskog IK
Add a photo to this gallery

Retrieved from "https://icehockey.fandom.com/wiki/2011–12_GET-ligaen_season?oldid=300816"
Community content is available under CC-BY-SA unless otherwise noted.