The playoff qualifications were played between March 14, and 16, 2012 in a Best-of-three mode.

The quarterfinals were played in a Best-of-seven mode starting March 21 until April 3, 2012. 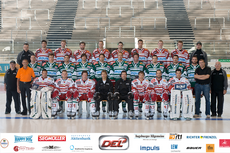 Thomas Sabo Ice Tigers
Add a photo to this gallery

Retrieved from "https://icehockey.fandom.com/wiki/2011%E2%80%9312_Deutsche_Eishockey_Liga_season?oldid=300801"
Community content is available under CC-BY-SA unless otherwise noted.