The Royal Bank Cup was competed for by the winners of the Doyle Cup, Anavet Cup, Dudley Hewitt Cup, the Fred Page Cup and the host city, the Dauphin Kings of the Manitoba Junior Hockey League.

The tournament was hosted by the Dauphin Kings and ran from May 1 to May 9 of 2010 with games played at the Credit Union Place in Dauphin, Manitoba.[1] Charlie Major will be appearing as a special guest the night before the opening game.[2]

In the end, the defending 2009 Royal Bank Cup champion Vernon Vipers were too much for the hometown Dauphin Kings, crushing them 8-1 in the final. In another lopsided results, during the round robin, the Brockville Braves crushed the Oakville Blades 11-2 to tie two different tournament records (goal by a winning team in one game, one game spread).[3] 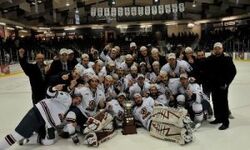