The 2010 Frozen Four took place April 8 and April 10, 2010 in Detroit, Michigan at Ford Field. It was hosted by the Central Collegiate Hockey Association and the Detroit Metro Sports Commission.

Unlike the previous year, when only one #1 seed (Boston University) made it through the Regional brackets, three of this year's #1 seeds appeared in the Frozen Four. RIT was a #4 seed and upset Denver in the East Regional; they are the fourth #4 seed to make it to the Frozen Four in three years, a feat that hadn't been accomplished once prior to 2008.

Coincidentally, the four teams in the tournament were also the top four teams ranked by scoring differential in Division I this season (Miami first, followed by RIT, Wisconsin, and BC). 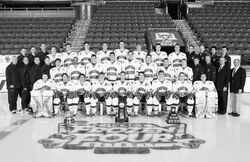 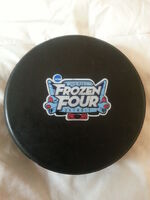