For the 2010 season Melbourne Ice relocated to a new stadium in Melbourne. The new ice rink known as the Icehouse is the home of the Olympic Winter Institute of Australia. It features two olympic size rinks and is one of three in Australia to be fully-glassed.[1] The Gold Coast Blue Tongues signed an agreement with the Southern Stars Ice Hockey Club to play two of their home games in Brisbane at Acacia Ridge, which is a full sized olympic sized-rink.[2]

The playoffs were held between August 28 and August 29 with all three games being played at the Icehouse in Melbourne.[3] Melbourne Ice won the final and the Goodall Cup after defeating the Adelaide Adrenaline 6 to 4.[4]

Only the top five goaltenders, based on save percentage.[6] 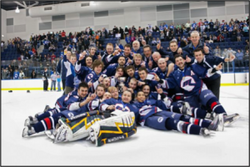 Retrieved from "https://icehockey.fandom.com/wiki/2010_AIHL_season?oldid=312476"
Community content is available under CC-BY-SA unless otherwise noted.