The 45th season of the WHL kicked off on September 24, 2010 with 8 games on the table. On February 21, the defending champions Calgary Hitmen hosted Regina Pats, who are Canada's oldest major-junior hockey team at McMahon Stadium for an outdoor game in conjunction with the NHL game, the WHL teams will wear retro inspired jerseys. The Spokane Chiefs also hosted the Kootenay Ice outdoors on January 15, 2011, being the first game of such. Broadcast partners including Rogers Sportsnet, Shaw TV and FSN return for coverage throughout the season, the teams will play 792 regular season games between September and March. The 2010-2011 Season was the first to be featured in EA Sports NHL 11 video game including all the teams and rosters.

Players are listed by points, then goals.[1]

These are goaltenders that lead the league in GAA that have played at least 900 minutes.[2]

In total, 40 WHL players were selected at the 2010 NHL Entry Draft.

The 2010 Subway Super Series was held in six cities across Canada, with two cities for each league within the Canadian Hockey League. The series begun on November 8, 2010, and concluded on November 18, 2010. Both Western Hockey League games were held in the province of British Columbia.

All six games were televised nationwide on Rogers Sportsnet, which broad casted both games from the Western Hockey League. 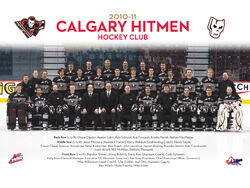 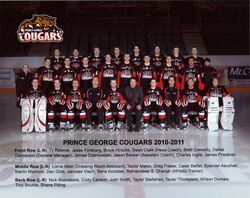 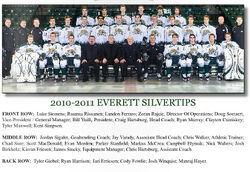