The Amarillo Gorillas and the Corpus Christi IceRays folded and both were replaced by a North American Hockey League team.

On June 10, 2010, it was announced that four IHL teams made the move to the CHL, the Fort Wayne Komets, Bloomington PrairieThunder, Dayton Gems and the Quad City Mallards[2].

It was later announced that the Evansville IceMen would also will participate in the league[3].

The league had also announce an expansion team to be based in Allentown, PA to be known as the Lehigh Valley Xtreme. The team never came to be due to lack of an arena to play in. Strangely, an expansion team in the United Hockey League was awarded for the 2000-01 season and never took to the ice due to the same reason.  The city finally got an American Hockey League franchise for the 2014-15 season when the PPL Center opens.

It was announced that the 2011 Central Hockey League All-Star Game would be held at the Rushmore Plaza Civic Center, home of the Rapid City Rush on January 12, 2011. The defending champions Rapid City Rush and coach Joe Ferras will form one team in the match-up will and will be opposed by a team of CHL All-Stars composed of players from the other 17 CHL member teams. 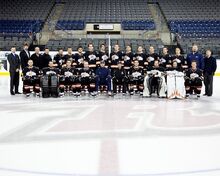