Ice Hockey Wiki
Register
Don't have an account?
Sign In
Advertisement
in: American Hockey League seasons, 2011 in hockey, 2010 in hockey

The 2010–11 AHL season is the 75th season of the American Hockey League. An all-time high of thirty teams will play 80 games each during the regular season schedule, which started on October 8, 2010 and ended on April 10, 2011. This season features the addition of one new team, the relocation of two others, and the renaming of another.

The following players are sorted by points, then goals.[3]

The following goaltenders with a minimum 1500 minutes played lead the league in goals against average.[4] 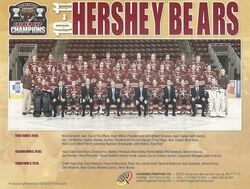