The tournament began on May 15, 2009 with Kelowna beating Rimouski 4–1. Windsor defeated Rimouski in the tiebreaker and Drummondville in the semifinal, becoming just the second team since the current Memorial Cup tournament format was adopted in 1983 to reach the final after losing its first two games. Windsor then captured the Memorial Cup, defeating Kelowna 4–1 on May 24, 2009, becoming the first team in Memorial Cup history to win the tournament after starting 0–2, and also the first to win coming out of the tiebreaker.

Note: Windsor finished 4th based on head to head matchups but defeated Rimouski in the tiebreaker.

These are the top skaters based on points. If the list exceeds ten skaters because of a tie in points, all of the tied skaters are shown. 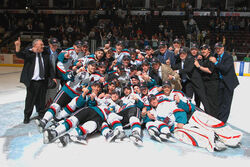 Kelowna Rockets
Add a photo to this gallery

Retrieved from "https://icehockey.fandom.com/wiki/2009_Memorial_Cup?oldid=614640"
Community content is available under CC-BY-SA unless otherwise noted.