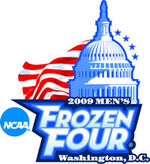 The 2009 Frozen Four took place April 9 and April 11, 2009 in Washington, D.C. at the Verizon Center, hosted by the United States Naval Academy and the Greater Washington Sports Alliance. It was the first Frozen Four to take place in the District of Columbia.

This is Boston's first Frozen Four since 1997 and Vermont's first appearance since 1996. This is the first-ever appearance for Miami and for Bemidji. In fact, Bemidji's appearance is the first for any school from outside the "Big Four" conferences.

Boston, the #1 overall seed, was the only #1 seed to win a game in the regionals, and the only #1 or #2 seed to make it to the Frozen Four. Vermont was a #3 seed and Miami and Bemidji were #4 seeds.

Bemidji is the first College Hockey America team, and the first outside of the "Big Four" conferences, to make the Frozen Four. Bemidji and Miami became the second and third #4 seeds to advance to the Frozen Four (after the Notre Dame Fighting Irish last year).

The four regional champions played on April 9 in the semifinal round.

The second game featured two newcomers to the Frozen Four, and one will end up playing in their first-ever Division I championship game.

On April 11, the semifinal winners played in the NCAA Championship Game.

Boston scored first, but Miami tied it in the second period. In the third period, Miami took the lead at 12:31, then got an apparent insurance goal at 15:52. But Boston wasn't done. They pulled their goalie for an extra attacker with about three minutes remaining. Zach Cohen pulled the Terriers within one with 59 seconds remaining, and Nick Bonino scored with just 17 seconds remaining to force overtime.

Boston came up with the championship goal at 11:47 of overtime to end an amazing run by a RedHawks team that came within 17 seconds of an historic upset.

Boston's penalty kill was key to the win; they kept Miami scoreless on seven power plays. Miami, on the other hand, stymied Boston by staying out of the box, allowing the Terriers only two power plays.

Boston University wins its fifth national title. Out of five tournaments (six if one counts the Northeast Regional separately) in which the Terriers participated this year, they won every single one, and ended the season with a 35-6-4 record.

Colby Cohen is the Tournament Most Outstanding Player. 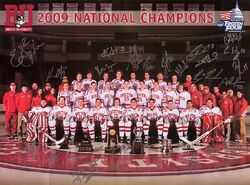 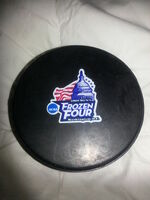