The 2009 AIHL season is the 10th season of the Australian Ice Hockey League, the 8th in which the Goodall Cup will be awarded to the league champions. The season opens on April 25, 2009 with games in Liverpool and Canberra. Newcastle North Stars won the V.I.P. Cup after finishing atop the ladder in the regular season.

The 2009 season will be reduced to seven teams after the Central Coast Rhinos dropped out due to changes made in the licensing model[1]. Two teams were renamed for the start of the season, Western Sydney Ice Dogs, dropped the Western part of the title to become the Sydney Ice Dogs[2] and the Adelaide A's have been renamed for the start of the season, playing under the new name of Adelaide Adrenaline[1].The Sydney Ice Dogs have also been forced to relocate to Liverpool's Catholic Club’s ice rink after their former home at Baulkham Hills rink withdrew from the league.

On the 25-26 of July there is a weeks break for the Junior Men’s national tournament, known as the Brown Tournament.

Note: "SO" indicates that a game was won through a shootout. Games schedule sourced from the AIHL[3].

The playoffs began on August 29, with the final to be held on August 30[3]. They will be held at the Hunter Ice Skating Stadium in Warners Bay, New South Wales[4]. 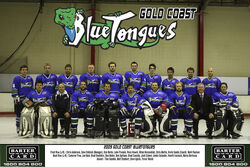 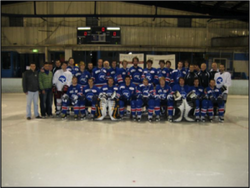 Retrieved from "https://icehockey.fandom.com/wiki/2009_AIHL_season?oldid=383442"
Community content is available under CC-BY-SA unless otherwise noted.