Elitserien will bring in a number of rule changes for the start of the 2009–10 Elitserien season aimed at increasing offence. Two rule changes are to Rule 440 on faceoffs. Firstly, the first faceoff of a power play will now be in the defending zone of the team that committed the foul, regardless of where the play was stopped. Secondly, a faceoff will always be located at one of the nine faceoff spots. In previous seasons a faceoff could have been located anywhere on the rink.[1][2]

For the 2009–10 Elitserien season around 100 matches will be refereed by four referees.[3] Also, the referees uniforms will change to the classical black striped shirts with a number on the back instead of the referee's name, as in previous seasons.[2]

Each team will play each other five times during the regular season. Due to play in the Champions Hockey League and matches against two NHL teams, Färjestads BK's and Linköpings HC's matches in round 4 are played out of the schedule.[4] After the initial season schedule have changes been made for rounds 3, 6, 13, 16 and 38.[5]

The general managers of the 12 elite league clubs in Elitserien met on June 9, 2009 and agreed on creating a jointly-owned development company that will focus its work on the development of elite ice hockey in Sweden. The company's executive officer is Håkan Loob who will put is work in Färjestads BK on hold. It was also decided that the elite clubs will produce a new shareholder deal for the Swedish hockey league, Svenska Hockeyligan AB (SHL), as the current deal expires on April 30, 2010. The clubs will participate in the current league system for seasons 2009–10 and 2010–11.[6]

On December 28, 2009, Färjestads BK and Frölunda HC played their round 33 game outdoors at Ullevi Stadium in Gothenburg. The match organizers' goal was to break the previous outdoor game spectator record from 1962 where 23,192 spectators attended a match between Frölunda HC and Djurgårdens IF at Ullevi. In the 2009 match, the boards of the rink was completely transparent and Frölunda HC played in jerseys looking as the jerseys from 1962, void of advertisements.[7][8] 31,144 spectators watched the game.

As of the end of the regular season.[9]

As of the end of the regular season.[10] 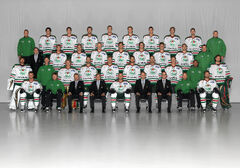 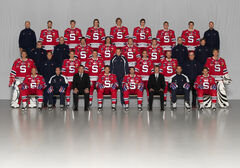 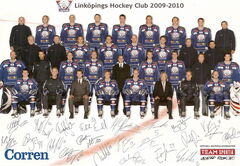 Djurgårdens IF
Add a photo to this gallery

Retrieved from "https://icehockey.fandom.com/wiki/2009-10_Elitserien_season?oldid=748354"
Community content is available under CC-BY-SA unless otherwise noted.