Ice Hockey Wiki
Register
Don't have an account?
Sign In
Advertisement
in: 2009 in hockey, 2010 in hockey, Central Hockey League seasons

The 2010 Central Hockey League All-Star Game was on January 13, 2010 at the Laredo Entertainment Center.

The season ended on May 4, 2010 when the Rapid City Rush defeated the Allen Americans in double overtime.

New Mexico and Rocky Mountain both announced in June that they would be suspending operations for the season. Rocky Mountain stated that they were hoping to return for the 2010-11 season. New Mexico's owners asked for the year off in order to attempt to sell the team in hopes of keeping the New Mexico franchise from ceasing entirely.

Oklahoma City ceased operations on July 2, withdrawing their lease with Oklahoma City. Blazers management stated that "it is not economically feasible for us to go on at this point." Some fans believe that this was a move in order to bring an American Hockey League team to Oklahoma City.  The city received the Edmonton Oilers AHL affiliate for the 2010-11 season.

The CHL added two teams for the 2009-10 season in Allen, Texas and Independence, Missouri.

The Missouri Mavericks, based in the Kansas City suburb of Independence, Missouri, will compete in the newly opened Independence Events Center. 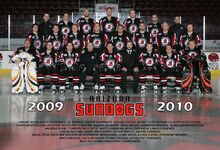